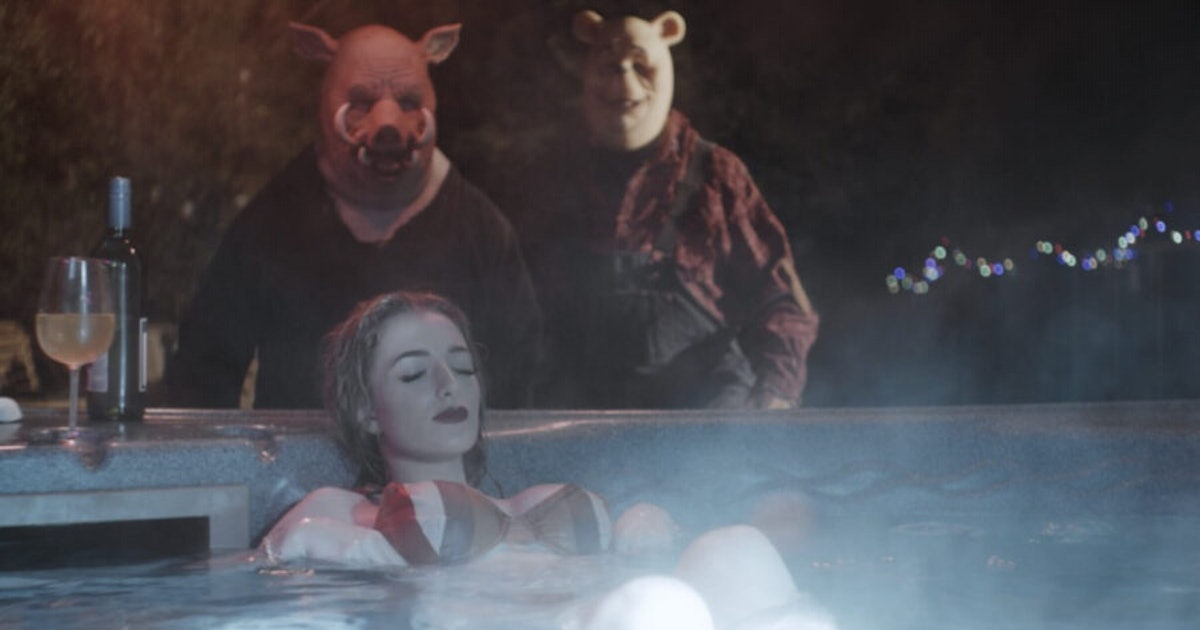 Most of us have happy memories from Winnie-the-Pooh whether that’s from falling in love with the characters when we were a kid or sharing those stories with our kids. But if you’ve seen some promos for a slasher horror movie starring Winnie and been confused, it’s real. Winnie-the-Pooh is entering a new genre. Here’s what we know.

It’s a little startling when you first see the photos from the upcoming Winnie-the-Pooh: Blood and Honey film. The stills show a demonic Pooh with Piglet as they get ready to attack a young woman who is just chilling in her hot tub. The internet was confused – was this real? Is this weird fan fiction? Well, yes, and yes.

In January of this year, the A.A. Milne’s original Winnie the Pooh stories entered public domain which opened the door for someone to take on a different twist. And that’s what director Rhys Waterfield decided to do. He wrapped up production of his film earlier this month and he’s enjoying the response on social media, calling it “absolutely crazy.”

“Because of all the press and stuff, we’re just going to start expediting the edit and getting it through post-production as fast as we can,” Waterfield told Variety. “But also, making sure it’s still good. It’s gonna be a high priority.”

The upcoming movie is described as Winnie and Piglet as “the main villains … going on a rampage” after Christopher Robin abandoned them on his way to college. So, it’s got a Toy Story feel to it but with an adult twist… got it.

“Because they’ve had to fend for themselves so much, they’ve essentially become feral,” Waterfield explained. “So they’ve gone back to their animal roots. They’re no longer tame: they’re like a vicious bear and pig who want to go around and try and find prey.”

It’s not surprising that this film is getting attention. It’s weird to see Winnie and friends doing things that are adult and evil. But we’ve seen it done before with other stories! There’s been a ton of adult-themed Alice in Wonderland adaptations, to say nothing of the horror that is Return to Oz. This also happened very recently with an equally WTF horror version of The Banana Splits.

Still. Let’s face it. Nobody asked for this.

How Do You Sculpt an Hourglass Figure?

5 Mental Health Tips for Self Care – You Must Get Healthy

Events | Inside Higher Ed | The Future of Expense Management