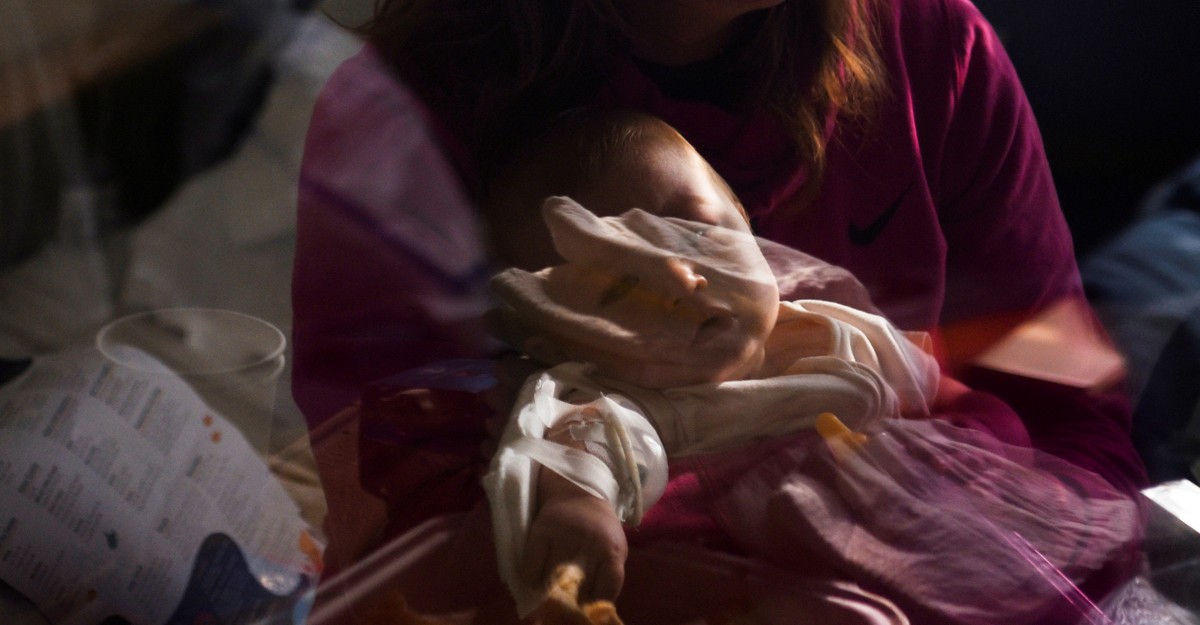 At the height of the coronavirus pandemic, as lines of ambulances roared down the streets and freezer vans packed into parking lots, the pediatric emergency department at Our Lady of the Lake Children’s Hospital, in Baton Rouge, Louisiana, was quiet.

It was an eerie juxtaposition, says Chris Woodward, a pediatric-emergency-medicine specialist at the hospital, given what was happening just a few doors down. While adult emergency departments were being inundated, his team was so low on work that he worried positions might be cut. A small proportion of kids were getting very sick with COVID-19—some still are—but most weren’t. And due to school closures and scrupulous hygiene, they weren’t really catching other infections—flu, RSV, and the like—that might have sent them to the hospital in pre-pandemic years. Woodward and his colleagues couldn’t help but wonder if the brunt of the crisis had skipped them by. “It was, like, the least patients I saw in my career,” he told me.

That is no longer the case.

Across the country, children have for weeks been slammed with a massive, early wave of viral infections—driven largely by RSV, but also flu, rhinovirus, enterovirus, and SARS-CoV-2. Many emergency departments and intensive-care units are now at or past capacity, and resorting to extreme measures. At Johns Hopkins Children’s Center, in Maryland, staff has pitched a tent outside the emergency department to accommodate overflow; Connecticut Children’s Hospital mulled calling in the National Guard. It’s already the largest surge of infectious illnesses that some pediatricians have seen in their decades-long careers, and many worry that the worst is yet to come. “It is a crisis,” Sapna Kudchadkar, a pediatric-intensive-care specialist and anesthesiologist at Johns Hopkins, told me. “It’s bananas; it’s been full to the gills since September,” says Melissa J. Sacco, a pediatric-intensive-care specialist at UVA Health. “Every night I turn away a patient, or tell the emergency department they have to have a PICU-level kid there for the foreseeable future.”

I asked Chris Carroll, a pediatric-intensive-care specialist at Connecticut Children’s, how bad things were on a scale of 1 to 10. “Can I use a Spinal Tap reference?” he asked me back. “This is our 2020. This is as bad as it gets.”

Read: The strongest signal that Americans should worry about flu this winter

The autumn crush, experts told me, is fueled by dual factors: the disappearance of COVID mitigations and low population immunity. For much of the pandemic, some combination of masking, distancing, remote learning, and other tactics tamped down on the transmission of nearly all the respiratory viruses that normally come knocking during the colder months. This fall, though, as kids have flocked back into day cares and classrooms with almost no precautions in place, those microbes have made a catastrophic comeback. Rhinovirus and enterovirus were two of the first to overrun hospitals late this summer; now they’re being joined by RSV, all while SARS-CoV-2 remains in play. Also on the horizon is flu, which has begun to pick up in the South and the mid-Atlantic, triggering school closures or switches to remote learning. During the summer of 2021, when Delta swept across the nation, “we thought that was busy,” Woodward said. “We were wrong.”

Children, on the whole, are more susceptible to these microbes than they have been in years. Infants already have a rough time with viruses like RSV: The virus infiltrates the airways, causing them to swell and flood with mucus that their tiny lungs may struggle to expel. “It’s almost like breathing through a straw,” says Marietta Vazquez, a pediatric-infectious-disease specialist at Yale. The more narrow and clogged the tubes get, “the less room you have to move air in and out.” Immunity accumulated from prior exposures can blunt that severity. But with the pandemic’s great viral vanishing, kids missed out on early encounters that would have trained up their bodies’ defensive cavalry. Hospitals are now caring for their usual RSV cohort—infants—as well as toddlers, many of whom are sicker than expected. Infections that might, in other years, have produced a trifling cold are progressing to pneumonia severe enough to require respiratory support. “The kids are just not handling it well,” says Stacy Williams, a PICU nurse at UVA Health.

Coinfections, too, have always posed a threat—but they’ve grown more common with SARS-CoV-2 in the mix. “There’s just one more virus they’re susceptible to,” Vazquez told me. Each additional bug can burden a child “with a bigger hill to climb, in terms of recovery,” says Shelby Lighton, a nurse at UVA Health. Some patients are leaving the hospital healthy, only to come right back. There are kids who “have had four respiratory viral illnesses since the start of September,” Woodward told me.

Pediatric care capacity in many parts of the country actually shrank after COVID hit, Sallie Permar, a pediatrician at NewYork-Presbyterian and Weill Cornell Medicine, whose hospital was among those that cut beds from its PICU, told me. A mass exodus of health-care workers—nurses in particular—has also left the system ill-equipped to meet the fresh wave of demand. At UVA Health, the pediatric ICU is operating with maybe two-thirds of the core staff it needs, Williams said. Many hospitals have been trying to call in reinforcements from inside and outside their institutions. But “you can’t just train a bunch of people quickly to take care of a two-month-old,” Kudchadkar said. To make do, some hospitals are doubling up patients in rooms; others have diverted parts of other care units to pediatrics, or are sending specialists across buildings to stabilize children who can’t get a bed in the ICU. In Baton Rouge, Woodward is regularly visiting the patients who have just been admitted to the hospital and are still being held in the emergency department, trying to figure out who’s healthy enough to go home so more space can be cleared. His emergency department used to take in, on average, about 130 patients a day; lately, that number has been closer to 250. “They can’t stay,” he told me. “We need this room for somebody else.”

Experts are also grappling with how to strike the right balance between raising awareness among caregivers and managing fears that may morph into overconcern. On the one hand, with all the talk of SARS-CoV-2 being “mild” in kids, some parents might ignore the signs of RSV, which can initially resemble those of COVID, then get much more serious, says Ashley Joffrion, a respiratory therapist at Baton Rouge General Medical Center. On the other hand, if families swamp already overstretched hospitals with illnesses that are truly mild enough to resolve at home, the system could fracture even further. “We definitely don’t want parents bringing kids in for every cold,” Williams told me. The key signs of severe respiratory sickness in children include wheezing, grunting, rapid or labored breaths, trouble drinking or swallowing, and bluing of the lips or fingernails. When in doubt, experts told me, parents should call their pediatrician for an assist.

With winter still ahead, the situation could take an even darker turn, especially as flu rates climb, and new SARS-CoV-2 subvariants loom. In most years, the chilly viral churn doesn’t abate until late winter, which means hospitals may be only at the start of a grueling few months. And still-spotty uptake of COVID vaccines among little kids, coupled with a recent dip in flu-shot uptake and the widespread abandonment of infection-prevention measures, could make things even worse, says Abdallah Dalabih, a pediatric-intensive-care specialist at Arkansas Children’s.

The spike in respiratory illness marks a jarring departure from a comforting narrative that’s dominated the intersection of infectious disease and little children’s health for nearly three years. When it comes to respiratory viruses, little children have always been a vulnerable group. This fall may force Americans to reset their expectations around young people’s resilience and recall, Lighton told me, “just how bad a ‘common cold’ can get.”

A Call for Change Behind The Stage in Bodybuilding

How to Fake 8 Hours of Sleep

10 Ways To Celebrate Pride Month With Your Kids In 2022