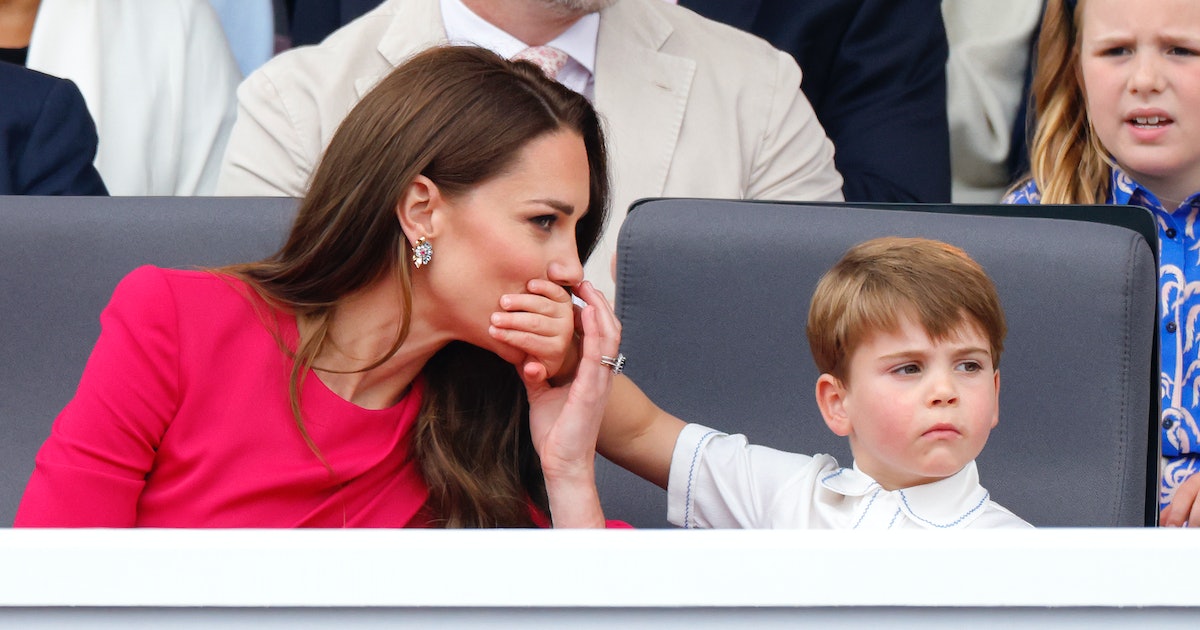 This past weekend millions of eyes tuned into the Platinum Jubilee festivities in the United Kingdom to honor Queen Elizabeth’s 70 years as Head of State. All eyes were on the royal family, but no one captured the world’s attention quite like little Prince Louis. The four-year-old son of Prince William and Kate Middleton went viral during a few outings this weekend, having a typical preschooler meltdown at one of the very public events.

Prince Louis first captured all the attention for the hilarious and adorable faces he made while standing next to the Queen on the balcony during the Trooping of the Colour event. He had no filter, covering his ears, yawning, and rolling his eyes, making it clear that his attention had waned. But just when people thought the little prince couldn’t get any funnier, he attended another event with his parents later in the weekend and he outdid himself.

Prince Louis joined his mom, Kate, and his siblings, Prince George, and Princess Charlotte, on the final day of the Platinum Jubilee celebrations. Also attending was Louis’ dad, Prince William, and his grandfather, Prince Charles with his wife Camilla.

The youngest prince sat while the two-and-a-half-hour procession played out in front of him, and it became very clear that his attention span wasn’t going to last—and he had a typical preschooler meltdown.

On several occasions, Louis was seen making a variety of faces, sticking out his tongue, rolling his eyes, throwing his head back, and more. He also had trouble keeping his hands to himself, covering his mom’s mouth while she tried to encourage him to sit still, pulling on the hair of his cousin sitting behind him, and at one point he kicked his older sister, Princess Charlotte. Prince William attempted to distract little Louis and had him on his lap for a while, as did Prince Charles, but Louis did what he wanted.

Anyone who has ever had to get their young preschool-aged kid to sit still for longer than 20 minutes can feel the frustration and empathize. It’s hard to fathom just how challenging it is to reel in a preschool kid particularly when the world’s eyes are on you, so you are kind of damned if you do and damned if you don’t.

And that’s how it played out on social media. There was a mix of commentary who ate up everything Louis was doing and were able to see the adorableness in the 4-year-old’s actions. But, of course, there were others who felt Louis’ behavior made them question the Duke and Duchess of Cambridge’s parenting style.

All-in-all Louis was really just being a typical kid who didn’t want to sit and be quiet for over two hours. For many of us, we struggle to get our kids to sit still long enough to eat dinner, so no judgment coming from us!

A Headset That Can Improve Dementia? You Bet! w/ Patrick Porter, PhD A Headset...