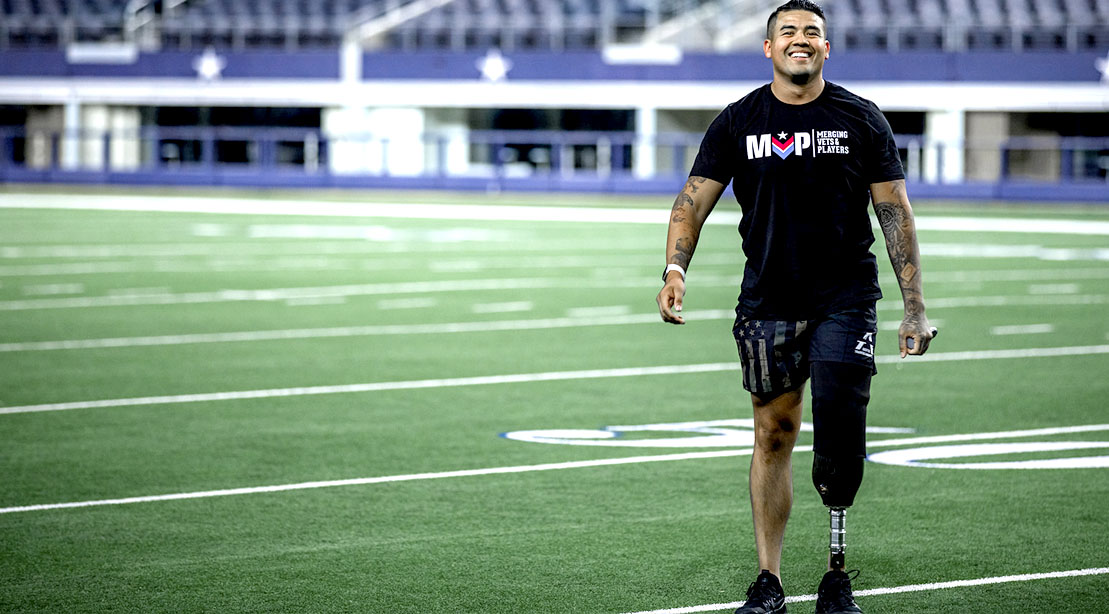 The total amount of weight Heath pulled was irrelevant considering his now-viral 2021 achievement took place barely a week after having his left leg removed. As dark as that moment sounds, amputation may barely crack the top 3 obstacles the former Marine has had to overcome.

Heath is lucky to be alive, after being mowed down by a drunk driver on New Year’s Day 2016, which resulted in the lower left half of his body completely shattered. After five years and 12 agonizingly painful reconstructive surgeries later, Heath opted for amputation.

But physical limitations, near-death experiences have never slowed Heath down — he was still performing walking lunges carrying 315 pounds on his shoulders just after his third surgery.

As a gay former Marine, John Edward Heath will forever carry with him an even heavier burden — the daily pain of seeing two people who stood closest to him, both his partner and best friend, fall victim to suicide, an all-too-common epidemic plaguing the military community. Both tragedies have motivated him to become more involved as a mental health advocate. “It’s not a title, it’s a mission,” the motivational speaker says of his advocacy role.

Getting the support for other military veterans as well as himself was how Heath hooked up with Merging Veterans and Players — or MVP — an organization founded in 2015 by Bellator MMA and NFL on Fox analyst Jay Glazer and former NFL player and Green Beret Nate Boyer. MVP’s mission has been to help both combat veterans and ex-athletes adjust to life after service and sports by “connecting them after the uniform comes off; providing them with a new team to assist with transition, promote personal development, and show them they are never alone.”

MVP began in Los Angeles and has expanded to seven U.S. cities with two more branches about to open. In just six years, Boyer says MVP has worked with more than 3,000 athletes and veterans while at the same time impacting nearly 10,000 lives. Now the group has formed a partnership with health giants GNC, under CEO, Josh Burris, has already donated $1 million toward expansion and improvement. It’s a great start, Heath says, for a peer-based support group that many veterans, including himself at one point, are still are reluctant to take advantage of, even as nearly 17 veterans die each day by suicide, according to recent statistics.

“We don’t talk about it as men — it’s frowned upon for a man to cry,” Heath says. “Because we were raised and wired to believe that men are not supposed to feel anything. Now a lot of people are, are seeing the negative outcome of that mentality.”

Boyer spent 10 years as a United States Army Green Beret, serving tours in in both Iraq and Afghanistan. He went on to the University of Texas, where he became the team’s long snapper before a brief stint with the NFL’s Seattle Seahawks. So if anyone could speak on behalf of adjusting after sports and military, he had both angles covered. What makes MVP different from other groups is it focuses on compassion, solutions, as well as accountability from its team and members.

As Boyer puts it, an MVP meeting is where physical meets emotional to create a social safe space for vets and athletes to share feelings and sweat it out on the MMA mats. From busting chops like your typical brotherhood to pushing limits during training, after the perspiring stops, the emotions open up as the group gathers to share feelings and find solutions to problems during this time.

“They know what I’m feeling because they actually lived it as well,” Boyer says. “It’s our peer-to-peer support element. We’re not licensed therapists when we’re sitting in that room, but that’s not always what you need. When someone’s in that room just nodding their head, it’s because they’ve seen and lived what you’re going. They know exactly what that feels like.”

It’s this support system that drove Burris, who was named GNC CEO in 2021, toward lending his support to MVP. In addition to working with Glazer on his Unbreakable line of products, GNC was already actively involved in veterans support, having 88 stores on military bases as many other stores managed by veterans throughout the country.

There was still more to be done, as GNC initially donated $1 million, which went to help open additional MVP chapters in Phoenix and Pittsburgh. Among the necessities MVP was able to supply included increased staffing — hiring licensed clinical staffers to help in extraordinary situations as well as secure additional gym space for its meetings.

“I can’t speak for how veterans feel,” Burris says, ”but I’ve had the pleasure of our involvement and being on the board of MVP and been in on some of the meetings at several chapters. From the outside, I would say the most common theme is people looking for a brotherhood or some sense of belonging to something outside of themselves.”

John Edward Heath gets around quite smoothly with a newly fitted prosthetic carbon fiber leg — hence his social media handle @Carbonfiber_john — and also via snowboard, as he’s training to become a member of the U.S. Paralympic Snowboarding team and qualify for the 2024 games. It’s a change of course for the powerlifter, after the International Olympic Committee’s decided to remove weightlifting from the 2028 Games squashed his opportunity to make that team. And there’s more to master, he says.

“If you asked where my head’s at, I’m really trying to reach for any opportunities that people are going to give me,” Heath says. “I want to skydive again as an amputee, I want to compete, I want to swim, maybe not competitively, but I’ve got to get back in the pool. It’s like I’ve been reborn.”

Heath’s a powerlifter, snowboarder, adaptive athlete with dreams of Olympic and Paralympic gold, a comeback story for the ages for a foster child with a far-from-fairytale childhood, he admits.

As an athlete, mental health advocate, and motivational speaker, Heath continues moving forward, which is one of the reasons he gravitated toward MVP. One of the difficulties Heath sees with support groups is its tendencies to dwell on past events. “I think the veteran community has a flaw of falling into the victim mentality,” he says. “A lot of people live in the past, and instead of redefining who they are and developing a new version of themselves post-service, they’re still living in the past. And that’s not healthy.”

After struggling with acceptance issues in the military for being gay, his introduction to MVP was met with little or no fanfare, which was a welcome relief. “I’ve been trying to let go of military anger of what happened to me,” he says. So when I told my story to MVP, nobody blinked or cared, which I had never experienced in the military.”

One of his biggest supporters now is Glazer, who put Heath in contact with Las Vegas Raiders defensive end Carl Nassib, who came out as gay in June of 2021. There was no pressure or strings, Heath says, just an open invite at the moment Heath felt comfortable telling his story.

“[Jay] took about 25 minutes to come talk with me while I was waiting for him, and I really didn’t know him,” he says. “Nate’s become a really good friend as well. I just think MVP is different.”

Yet for other veterans, walking through the door for the first time in search for help remains a debilitating struggle. It’s why Boyer still gets inspired each time a new face joins an MVP meeting.

“It’s still cool to watch somebody walk in that door — maybe a first-timer who’s never been here — and not know what to expect,” Boyer says. “And they develop that comfort level in which it was nowhere near what they expected. We’re all here to support each other, like, we just went through something that’s, you know, physically challenging. But no one left anybody behind, we got it together.”

Even Heath had his initial doubts about joining. Now he encourages anyone who is struggling emotionally to give it a try.

“If they’re looking for actual development of character, then they need to join MVP,” he says. “It’s not just character, for anyone who’s really struggling and needs to heal, they need to look into MVP.”

Dr. Barbara Sturm Shares Her Skincare go back and forth necessities