Home Lifestyle If You’re Taking Kids to a Pride Parade, Have These Conversations First 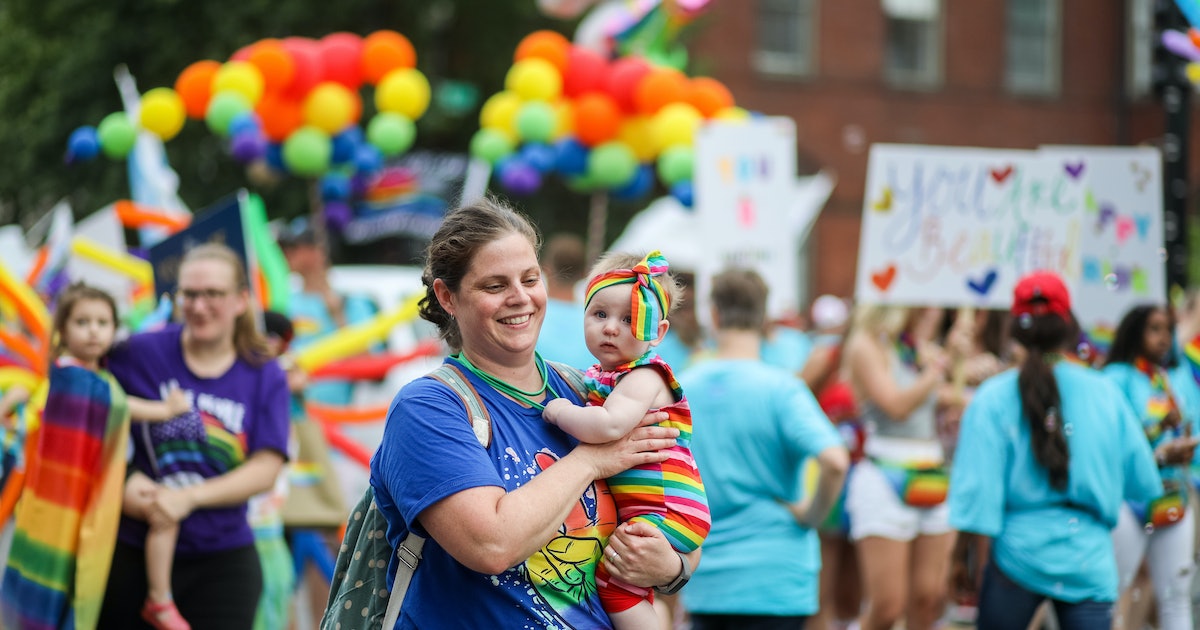 Pride Parades and the Pride festivals that follow are noisy and crowded. They’re filled with sights that may be new to kids, like public nudity and kink. Not to mention that Pride parades aren’t the most sober of places. So is it appropriate to take your young kids to Pride?

Considering the benefits for all families — including seeing other LGBTQ+ families like yours, or showing up as an ally if your family members are straight and cisgender — the answer is absolutely. Not to mention that these educational aspects of Pride are paired with joy and celebration. But it is necessary to talk to kids about new things they may see at Pride before diving it.

Why Kids Should Go to Pride

Pride parades started as a political event, first held in New York in June 1970 to commemorate the first anniversary of the Stonewall Riots. The uprising, which followed a police raid of the Stonewall Inn, an LGBTQ+ bar in the West Village in New York, lasted six days and kicked off the gay rights movement. At the time, LGBTQ+ people faced unfettered persecution, and many were in the closet and ashamed of their identities as a result of social condemnation. In response, the organizers of the first Pride parade made the official chant for the march “Say it loud, gay is proud,” a tradition that has continued for more than 50 years.

The political aspect of the parade also continues, says Suzanne Ford, the interim executive director of San Francisco Pride. Families representing Black Lives Matter and trans kids are the first contingents marching in the San Francisco parade this year. They’re “placed first so that we always know that we still have work to do and that San Francisco Pride is supposed to be doing that work,” Ford says. “We also know that the parade is a celebration of our culture,” she adds, so expect “colorful, artistic, expressions of joy.”

This year marks an especially important celebration of Pride. Attending the parade is one way to stand against the anti-LGBTQ movement sentiment that’s front and center in the U.S. right now, as evidenced by legislation such as Florida’s Don’t Say Gay or Trans law and Texas’s ban on gender-affirming care for trans kids.

Here are a few tips for getting the most out of Pride with your family.

Prepping Kids for a Pride Parade

If you’re taking your family to Pride for the first time, make sure you have a conversation about it ahead of time. Share the history of Pride in an age-appropriate way, suggests Jessica Fish, Ph.D., an assistant professor of family science who specializes in LGBTQ+ families at the University of Maryland’s School of Public Health. Rainbow: A First Book of Pride is a great option for kids younger than 10.

“Talk to your children about Pride as if it’s not just this big party, but it’s a celebration of being — that it’s a recognition of historical oppression and uprising,” Fish says. “[Understanding] the roots of that celebration of Pride is just as important as your child understanding that LGBTQ people exist and thrive within their communities.”

Before going to Pride, you should also sit your kids down with a few more children’s books about LGBTQ+ people and families. Kids have a tendency to point and ask questions when they’re exposed to new things, and you don’t want people celebrating Pride to become a convenient life lesson for your children. If you’re straight and cisgender or just haven’t exposed your kids to much of the LGBTQ+ community yet, prepping your children beforehand can ensure that your family is respectful of queer people while at Pride.

Jenifer McGuire, Ph.D., an associate professor of family social science at the University of Minnesota, has been to Pride celebrations across the world with her family, from Tucson to Amsterdam. McGuire, a lesbian parent, always preps her kids for possible adult content beforehand. After a few events, the kids knew to expect nudity and other surprises. “They just had to learn to laugh and enjoy things. Like there were these Beanie Babies with giant penises on them,” McGuire says. “For a fourth- and fifth-grade kid, that’s super funny.”

The benefits to her family always outweighed any potential downside, McGuire says, because they could see how many other queer families were in their community and around the world. “They don’t necessarily get that from their swimming teams and drama clubs and school,” she says.

Pride parades themselves are really fun for kids, McGuire says. “They sit on the curb and people throw stuff to them.” Freebies like necklaces and bottles of water and bags of Cheerios abound. “I think it’s a lot more fun than most parades.”

But parades are just part of what Pride has to offer. Once the marching is finished, head over to the Pride festival, where you’ll typically find food, drinks, and booths, as well as kid-friendly play areas. My daughter loves our local Pride for the kids’ area, which has inflatable bounce houses and pony rides. Be sure to research what your city’s Pride has to offer in terms of food and entertainment for kids before you go, because each Pride is different.

Finally, double-check the dates of the event. Although New York and San Francisco hold their Pride parades to coincide with the anniversary of the Stonewall riots, some cities hold them at other times during the month of June, or even at other times of year, like Miami Beach (April) and Oakland (September).

Celebrating Pride doesn’t have to stop at the parade and festival. Check out Fatherly’s list of 10 activities to do with your kids to celebrate Pride all month long.

definition of witless by The Free Dictionary

Top Awesome Foods & Drinks for Period Cramps You Should Have