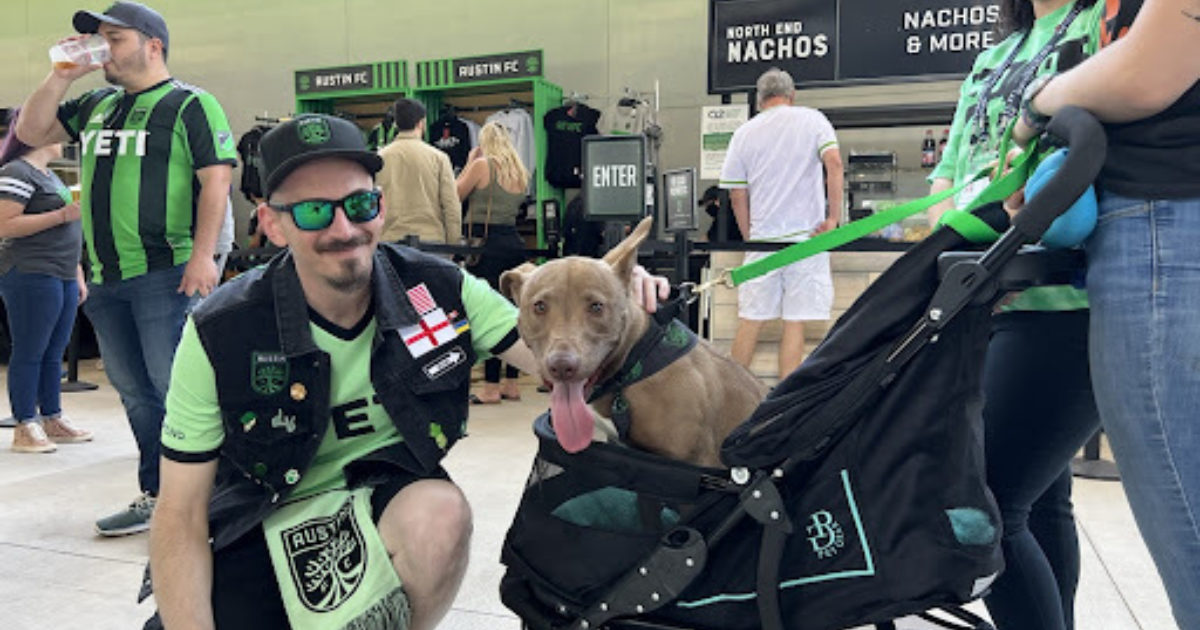 Since the inaugural season in 2021, Austin FC and Austin Pets Alive! have partnered up to showcase eligible dogs as honorary Austin FC mascots at each regular-season home match.

The first-of-its-kind partnership features APA! dogs through social media outreach and in-venue activations during each match at Q2 Stadium, all in support of Austin’s status as the country’s largest “no-kill” city and the promotion of APA!’s rescue, adoption, foster, and volunteerism efforts through this unique community platform. Last year, all 18 of the honorary mascots were adopted into loving homes, and many more will be adopted this year!

Austin FC presented the first Honorary Mascot of the club’s second season: Gavin! Gavin is a sweet labrador retriever mix who arrived at Austin Pets Alive! after likely being hit by a car. Gavin’s jaw was reattached and his back legs were injured but that hasn’t stopped this friendly pup from now running around with his custom wheelchair.

Gavin is one year old and loves other playful dogs just as much as he loves snuggling on the couch. Gavin is ready to be adopted from Austin Pets Alive! and go home with his new best friend.

We are thrilled to announce that the second Austin FC Honorary Mascot is Kenneth! Kenneth is a loveable three-year-old heartworm-positive dog who was looking for a loving home. If you are looking to meet the cuddliest couch potato, look no further than Kenneth (or Kenny as his fosters call him).

Kenny is just one of the sweetest pups. Throughout the day, he’ll come up to his fosters, look up with his beautiful hazel eyes and quietly ask for petting. He loves attention from his humans but is also independent enough to wander off to somewhere on his own once he is satisfied.

Austin FC presents the latest Honorary Mascot from Austin Pets Alive!: Rose! This one-year-old playful and happy dog is ready to find her forever home. Rose was shot as a puppy and suffered a spinal injury. She doesn’t let that prevent her from running around any park or yard with her custom-built wheels.

Rose gets along well with other dogs and cats. Her favorite thing to do is chase a tennis ball around and snuggle up with you!

Meet Austin FC’s latest Honorary Mascot from Austin Pets Alive!: Lance! Lance is a three-year-old lab mix who loves nothing more than to make himself comfortable in your lap. He is completely deaf, but that doesn’t stop him from playing just as well as the rest of the dogs!

The Austin FC community really showed just how amazing and inclusive they are in their appreciation of Lance, with some of them even greeting him in sign language.

The most recent Austin FC Honorary Mascot, RayRay, was adopted!

This sweet pup came to Austin Pets Alive! in 2019 after APD received a call that he was abandoned in a home (his previous family moved out and left him behind) – he was taken to Austin Animal Center and they called Austin Pets Alive!. RayRay went to an adoptive home but that owner returned RayRay when she had to move. In the past two months, RayRay has made appearances at SXSW and as the most recent Austin FC Honorary Mascot. We are excited to announce that an Austinite named Amylynne met RayRay and adopted him! Amylynne says RayRay’s favorite things are “walks, sunbathing, napping, and cuddles!”

This Is the Most Popular Yoga Practice on YouTube

A Jackson Hole Wellness Travel Guide: Hotels & What To Do