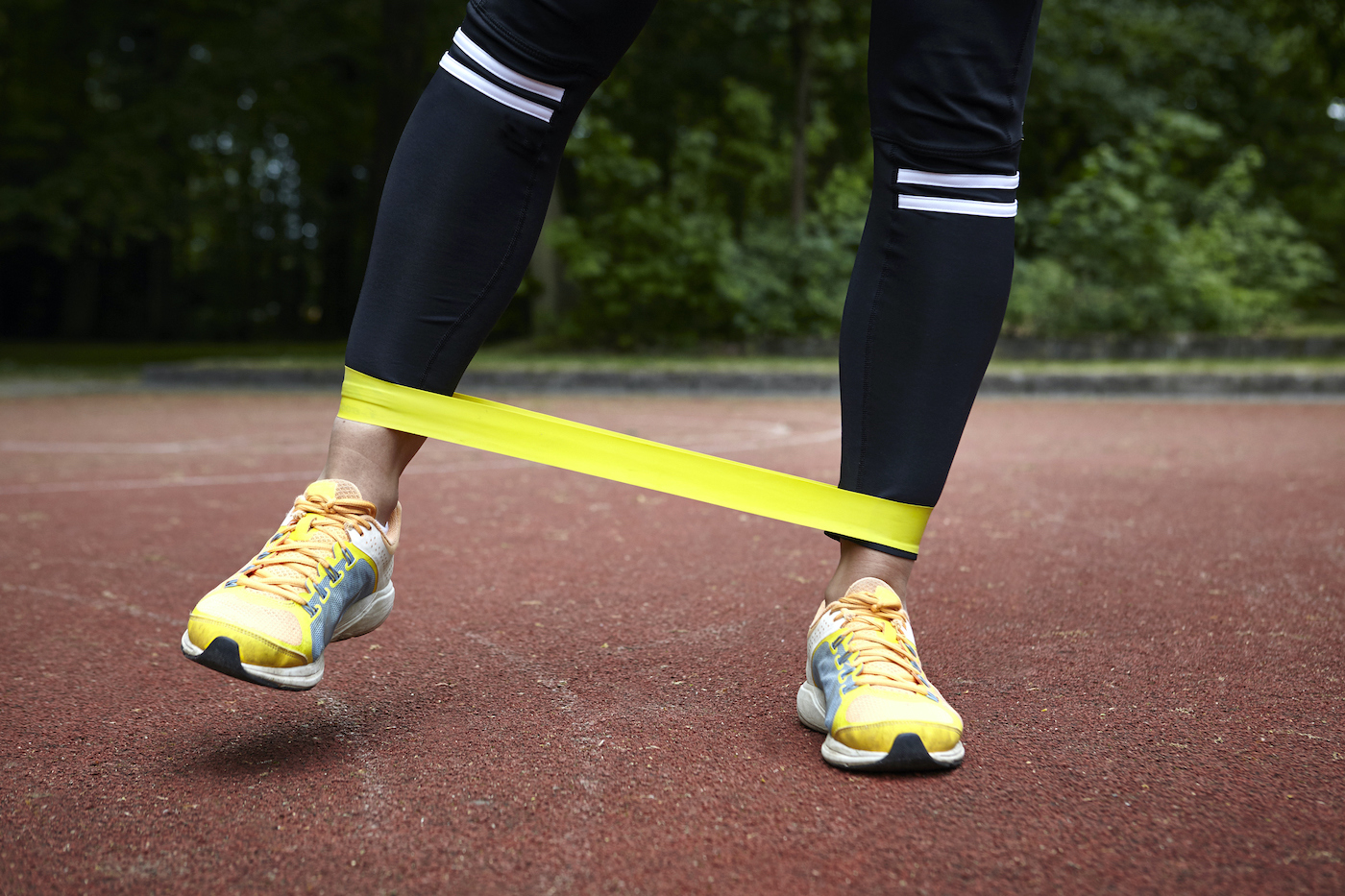 Facebook
Twitter
Pinterest
WhatsApp
The pros of working out at home include not having to commute or comb your hair to squeeze a sweat session in during the day. Exercising at home can also be more cost-effective: Online memberships go for about the price of a fancy smoothie. (Or totally free if you head to YouTube.) The only con is that, chances are, your home lacks all the fancy (or at least large) equipment you can find at the gym. Resistance bands, however, solve that problem—especially if you’re a beginner fitness enthusiast.

“They come in a variety of lengths, difficulties—light, medium, heavy, extra-heavy—colors, and shapes,” says NASM-certified personal trainer Danny Saltos. “You can do a variety of exercises using resistance bands such as bicep curls, shoulder press, chest press, squats, and many more.” In other words, an affordable resistance band is pretty much all you need to recreate any piece of gym equipment at home and get a full-body workout.

If you’re a newbie who wants to give resistance band exercises a try, keep reading to learn the benefits of it, nine beginner-friendly moves, and tips on how to make the most out of your practice.

1. Easy on the joints

“Resistance band exercises are very much like traditional weight-bearing exercises, except that they have an anchor point and therefore engage more of the body with each exercise,” says Floery Mahoney, founder of Board30, a fitness studio franchise that provides a full-body resistance band workout. “The smooth and constant tension is much better for your joints and even helps strengthen your joints, the more you use them.”

If you want to ensure a symmetrical workout, resistance bands have your back (and core, and arms—you get the gist). “Resistance band exercises increase strength evenly, both concentrically and eccentrically [meaning, when you contract and release], so your muscles are strong but more pliable and less injury-prone,” Mahoney says.

Resistance bands may look flimsy, but don’t be fooled: They can help you build some serious muscle. “You can build muscle mass using resistance bands by increasing the tension and doing fewer reps,” Mahoney says. “You can also incorporate cardio more easily than with weights,” which are bulkier and more unwieldy.

You may not be doing a ton of traveling at the moment, but when you do, resistance bands make a great companion. You literally need no other equipment (see versatility benefit, below). “Stuff them in your luggage or throw them in your backpack,” Saltos says. “Some can even be bundled together in a small mesh bag.”

Versatility is another big benefit of resistance band exercises. “You can do just about every gym movement from the comfort of your own home,” Saltos says. “You can work your glutes, quads, chest, back, arms, and abs, all with a good set of bands.”

6. Great for all fitness levels

Whether you’re just starting to get into your fitness flow or you’re a total fitness fanatic, resistance bands work great for folks at all fitness levels because they come in a range of resistances. “Most sets of bands come in a variety of bright colors,” Saltos says. “This is visually appealing but also serves as a way to identify the different thickness/difficulties of each band. The lighter bands offer less resistance, and the heavier bands offer much greater resistance.”

Use a light resistance band for this. Step on the band with both feet shoulder-width apart. Hold onto the ends of the band with one hand on each side. Then squat. “This added resistance from the band mimics the same stimulus as using free weights or a cable machine,” Saltos says. Your legs and butt will feel the burn.

If you want to work on upper body strength, a resistance band chest press will help with that. “Using an anchor point that is about shoulder height (i.e., a fence, a sturdy poll, a door frame anchor), grab one handle in each hand and face away from the anchor point,” Saltos says. “Using a staggered stance, press the resistance band out until your arms are locked out in full extension.”

A resistance band bicep curl (shown at about the 11-minute mark in the above video) is another easy beginner exercise both Saltos and Mahoney recommend. “Stand on your resistance band using one anchor point (your left or right foot) and perform a bicep curl,” Saltos says. Mahoney’s tips for proper execution include tucking your elbows as you do the curl, maintaining a straight spine, and keeping a slight bend in your knees.

To do a core kick, sit on a mat and wrap your resistance band around one foot and hold the ends with both hands. “Keep the foot with the resistance band in the air and lean back at a 45 degree,” Mahoney says. “Bring your knee in towards your chest and then press out for 30 seconds. Repeat with the other leg.” In the video above, you can see a variation of those move with both legs hooked in the resistance band.

You don’t need weights or a rowing machine to get your back row on either. To do it, grab your resistance band and take a seat on the ground. “Run the band over both feet as your anchor,” Saltos says. “Sit up nice and tall, and pull both hands back in a rowing fashion using a neutral grip.” This will help build back strength, flexibility, and stamina.

Target your shoulders and abs with a lateral shoulder raise supported by your handy resistance band. Start by standing on your resistance band using one foot as your anchor. “Raise your right and left arms out until they are parallel to the ground so that your body resembles the letter T,” Saltos says. “Lower [your arms] and repeat.”

To get your triceps nice and toned, give a resistance band tricep press a try. “Stand on your resistance band,” Mahoney says. “Bend 45 degrees at the waist. Tuck your elbows into your rib cage with a 90-degree bend at the elbow. Press straight back with the hands to engage the triceps. It’s important to keep your head in line with your spine and the elbows stable.”

Give your shoulders some love with a resistance band shoulder press. Start by standing up straight on your resistance band. “Holding the resistance bands, bring your hands up to shoulder height with your elbows out to the side,” Mahoney says. “Press both hands straight up from the shoulder.” If you need to modify it, do one arm at a time instead of both.

To work on your quads, while standing, put your resistance band around one foot. “Hold on to the ends of the bands,” Mahoney says. “Bring your knee up towards your core and then press down and forward at a 45-degree angle. Make sure you have a slight bend in the support leg and a straight spine.” In the video above, you can see a variation performed while lying down.

Before you start getting into reps, Mahoney recommends testing the level of the band’s resistance first. If the resistance is too much or not enough, you can then adjust as needed.

As with any other style of exercise, Mahoney says watching your form is key. “Engage your core to protect your spine and don’t lock out your joints,” she says. If something doesn’t feel right, Saltos says that’s a sign to double-check your form. A quick Google search can help with that.

Although these resistance band exercises are great for beginners, you should take it easy (and slowly) when you’re first starting out. “Start by doing 30-minute workouts three times per week,” Saltos says. “You can slowly build up to 45 and 60 min workouts over the course of time.”

Keep your resistance band training interesting by experimenting and finding what feels good. “Play around with different modalities such as higher reps using lighter bands and lower reps using heavier bands,” Saltos says. “You can also do exercises for time, which is a great way to challenge your muscular endurance.”

Like You, Taylor Cassidy Is Best Friends With The Snooze Button